In my post of last week I wrote about the preparation work needed to be done to convert my vocabulary trainer to a metro-style – oh, I mean modern UI style or Windows 8 style or whatever this should be called now

This time we’ll add some real functionality to the app.

But before starting with that I’ll talk about a new issue I came across while developing. Suddenly Visual Studio didn’t start anymore and printed this error message:

What?
A stil running instance of Visual Studio worked perfectly, but I couldn’t start a new one!

The only thing (beside developing) I’ve done till the last reboot was to install some Windows Live apps (to get the Windows Live Writer). I’ve searched in the internet and, indeed, this was the problem. Obviously there were some incompatibilities between that and the installed Visual Studio version. But, luckily, there is already a bug-fix from Microsoft.

These things always cost time, but anyway, everything is still beta.

Good, now let’s go on with the app.

At the end of my last post I made the lessons selectable and added the app bar: 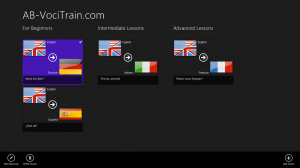 As a next step some functionality for the “Edit dictionary” button needs to be added. Therefore I created a new page where each word contained in a dictionary of a lesson is displayed again in a grid to stay with the UI design: 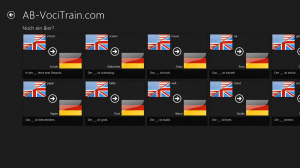 You can see that not only the words in both languages are displayed, but also a short info text for each word. When adding new words to the dictionary the user may enter such an info text as well to give a hint for the translation. In the example I used it to put the word in the context of a sentence. That’s a hint for beginners and should also increase the learning success.

To be able to change or delete a word the words can be selected just as the lessons on the previous view which opens an app bar again: 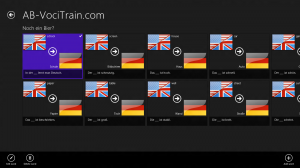 Now the user can edit an existing word or add a new one: 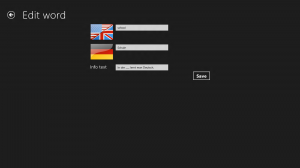 At this point words can already be added to the dictionary and this way lessons can be build. But the most important part is still missing: the real vocabulary training.

I’ll take care of that in the next week.

So read on next Monday!